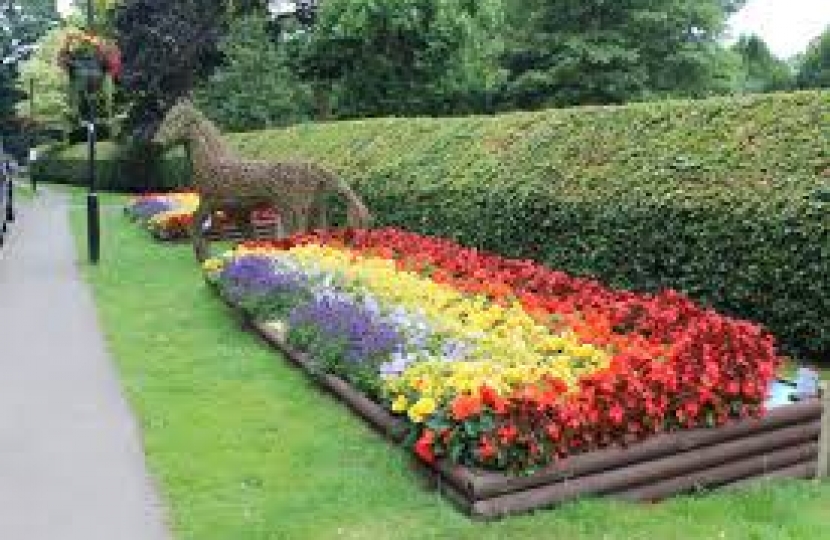 Community gardening volunteers in Market Bosworth are celebrating this morning after scooping medals in the Royal Horticultural Society’s (RHS) Britain in Bloom UK Finals. The winners were announced last night at an awards ceremony in Llandudno, North Wales.

Market Bosworth was named Joint Winner of the Large Village category, along with Usk in Wales. The RHS judges awarded the group a Gold medal for the exceptionally high standard of their entry, praising Dixie Grammar School’s garden, the outstanding diversity of plants in the country park meadows and the wide range of age groups involved in the campaign.

Market Bosworth’s team joined Britain in Bloom groups from across the UK at the RHS Britain in Bloom awards ceremony, hosted by TV presenter and renowned garden designer James Alexander-Sinclair.

RHS judges visited the 78 finalists over the summer to assess each group against three key criteria: community participation, environmental responsibility and horticultural achievement.

Depending on the standard reached, a Gold, Silver Gilt, Silver or Bronze medal is awarded, with a winner in each category and discretionary awards for achieving excellence in particular fields.

Between them, this year’s Britain in Bloom finalists planted over a million trees, bulbs and other plants, transforming villages, towns and cities into green havens that lift people’s spirits and improve their wellbeing.

Roger Burnett, Chair of the RHS Britain in Bloom judges, said: “It’s a huge honour to witness how Britain in Bloom brings people together and the lengths that groups go to make their communities clean, green and beautiful. We saw an incredible diversity of different planting schemes, including wildflower meadows for wildlife, community food growing and plants chosen to cope with our changing climate.

“This year, the standard was as high as ever but what really stood out was the creativity and ingenuity that groups showed in tackling the specific challenges of their particular areas, whether that be lack of funding, local social issues or tricky site conditions.”

David Tredinnick MP, Bosworth’s Member of Parliament, said, “This is fantastic news and I offer huge congratulations to the Market Bosworth in Bloom volunteers for this magnificent achievement.  They really have worked hard to make the already splendid setting of Market Bosworth look truly glorious and the team should be very proud of the recognition they have justly received with these national awards.”

Britain in Bloom is now in its 53rd year and, for the first time, a new BBC Two series following the quintessentially British competition is set to air in spring 2018.