I enjoy helping my community. I have a track record of getting things done.  Sacheverell Way Street Lights, Saved on two occasions.  After the Council had cut them down in 2019 with the intention of permanently removing them. I lead a successful campaign with the community to have them replaced. In 2020 they were replaced with new LED lighting.

I campaigned for improvements to the A50/A40 Island to stop the queuing back into Groby. The island has now been improved and traffic lights installed.  I secured a Weight Restriction on Ratby Lane, Field Head for residents.   I have secured improvements to the Ivanhoe Trail allowing easy access for mobility scooters, walkers and cyclists

I fought to protect the Green wedge between Ratby and Groby after Bloor Homes applied to build houses. I gave evidence at all 3 Appeals, which were all dismissed. The QC for Bloor’s commended me at the final appeal for my community dedication.  I also fought to protect the Burroughs from development. I proposed the refusal at the planning committee and gave evidence at the appeal which was dismissed. It was later dismissed at a judicial review. Unfortunately even though we won all those battles the Liberal Democrat Administration said it meant nothing at the planning committee as they passed the Cawrey application for 90 houses on the Burroughs which the Ratby community have always protected as their jewel in the crown. This Liberal Administration simply have no thoughts for communities like Ratby and have put forward the whole of the Burroughs in their new local plan consultations, much against mine and the communities protests.

I have also fought to protect Thornton against development on Beech Drive and a site around the reservoir. With the over development of Bagworth, I fought for and worked with my colleague and the developer to provide a shop in Bagworth which was badly needed.

I am currently fighting an application for a further 225 houses on Desford Lane, Ratby. Ratby simply does not have the infrastructure for the 287 house the Liberals passed over the last 18 months on Markfield Road Ratby.  As a result children are being forced to attend primary schools in Groby and those places are now becoming full. Parents are driving children to school, so much for the Borough Councils climate emergency.

I have worked with residents to secure social housing and disabled adaptations. I have also assisted residents with planning applications.

I have a long positive record of helping residents, and I pride myself on getting straight back to people  even when I am on holiday. I work 24/7 as residents have found out when they contacted me. I have offered my support to both Groby and Ratby community Libraries. I also helped to set up cooking and craft classes in both Ratby and Groby with my late wife Jenny. This helped those living alone to get out and meet people. During Covid I helped set up the Ratby and Groby Response team, making sure residents received food and supplies and medication.

I have an excellent record of working and supporting my community, which comes from the experience I gained whilst serving as a police officer for Leicestershire Constabulary for 43 years. Even though, two years ago I suddenly lost my wife Jenny after 42 years of marriage, I have continued to dedicate myself to my community. I write a monthly article in the spotlight and the local magazine and also write articles in the Herald to keep my community updated. I have an excellent attendance record at my 3 Parish councils. I am firmly committed to being a strong voice for Groby, Ratby, Field Head, and Bagworth and Thornton. It is a pleasure and an honour to serve as your councillor.

Ozzy O’shea The Man That Gets Things Done!!! 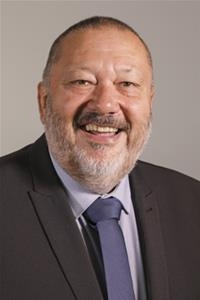