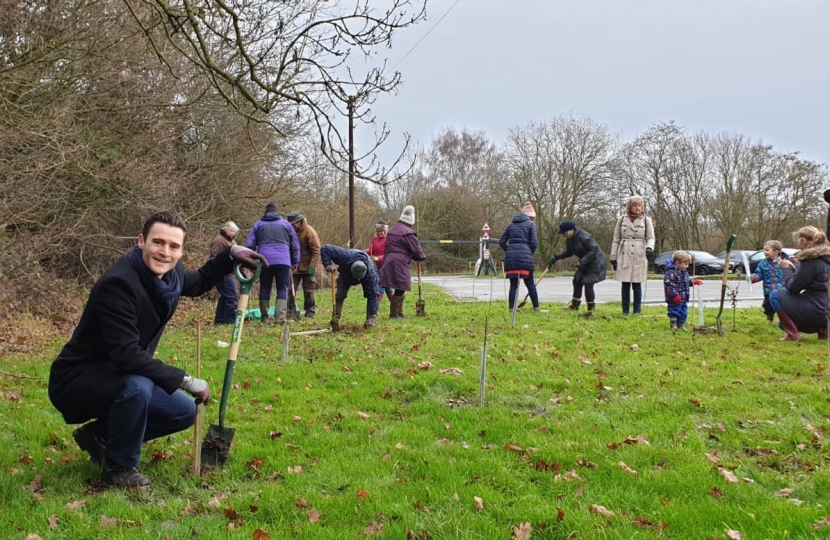 Luke Evans, the new Member of Parliament for Bosworth, has spoken about his eagerness to start representing the residents of Hinckley and Bosworth at Westminster after spending his first Christmas in the constituency following his election to Parliament.

Dr Evans, a GP, moved to the area with his wife, Charlie, earlier this year and has noted the warmth of the welcome offered to him by local people as an ‘overwhelming’ factor in settling in so quickly.

Dr Evans said, “The kindness and generosity shown to us by the people of Hinckley and Bosworth has been overwhelming, not just out and about on the campaign trail but in everyday life too.

“My job as an MP is very much about representing the people of this area and one of the main ways of doing that effectively is by getting out and meeting people. Before Christmas my first official duty was taking part in a tree planting with volunteers from the Leicester Road Resident’s Group, councillors and council staff; but that is only the start – I very much want to meet as many local people as possible over the course of the next twelve months.

“Christmas is of course a time for goodwill and unity, and as we move into a new decade it’s very important that the political world takes heed of that festive spirit. Over the coming months and years I want to ensure that I serve you as your MP, no matter whether you voted for me or not.

“Very soon it will be time to return to Westminster and I am raring to go to deliver on the promises that I made to the thousands of you who voted for me. But London really isn’t that far away and I very much look forward to being an active and visible part of this community in the years to come.

“May I take this opportunity to wish everyone in Hinckley and Bosworth a very happy, peaceful and prosperous New Year.”