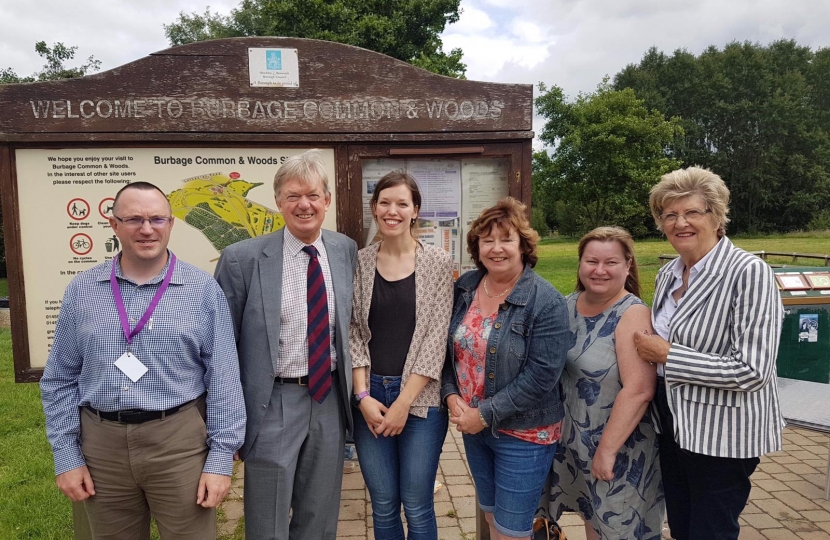 David Tredinnick MP met local residents at Burbage Common, along with Borough Councillors, to listen to their views about the proposed Hinckley National Rail Freight Interchange.

David spoke to many local residents who were concerned about the impact on Burbage Common, its wildlife and status as a Site of Special Scientific Interest (SSSI) with ancient woodland and green park open space.

The proposals include alterations to Junction 2 of the M69 at Sapcote, a support road Accessed from Leicester Road opposite the Rugby Club entrance and an almost unprecedented Warehousing and Distribution development with a spur link to the national rail network.  Considerable worry and alarm was evident that these plans will have a detrimental effect air quality and the environment, due to the increased number of HGVs and other vehicles, should this Hub be permitted.  This is particularly poignant as HBBC very recently declared a Climate Emergency, and undertook to  become Carbon neutral.

The previous Conservative administration at the Borough initiated a working group with dedicated planning support and funding to prepare the most effective case against the proposals, it is hoped that the new administration will continue this cross-party initiative to achieve the result demanded by residents.

David Tredinnick said, “It was a very positive meeting and campaigner Alison Searle has made fantastic efforts to raise awareness of this issue along with her colleagues in the Save Burbage Common group.

“This invaluable local green space is appreciated by visitors from throughout Leicestershire and the surrounding area who enjoy the Common’s peace and natural beauty.  People are clearly worried that this intrinsic part of the countryside may be spoilt forever should the proposed rail terminal plans be approved.  The likely impact on a local road network that is already running beyond capacity is another key issue for consideration.

“I have adamantly opposed this project from the start and have written to Government Ministers challenging some of the policy and planning assumptions involved.  I will continue working with my colleague Alberto Costa, who is the MP for South Leicestershire where the actual site of the proposed rail freight terminal is, to represent the views of local people as the planning process progresses.

“It is, however, extremely important that residents make their views known and I would encourage as many people as possible to attend the consultation events if they are able to do so or, if not, make representations online.”

Also present was Councillor Richard Allen, Leader of the Opposition at Hinckley & Bosworth Borough Council, who commented “This proposal is merely a speculative warehousing complex tacked onto the rail network, to ensure that the final decision on whether it will proceed is taken out of the hands of local councillors.  The Conservative Group will work with all parties and groups to ensure that the most robust case possible against this proposal is presented to the Government.”