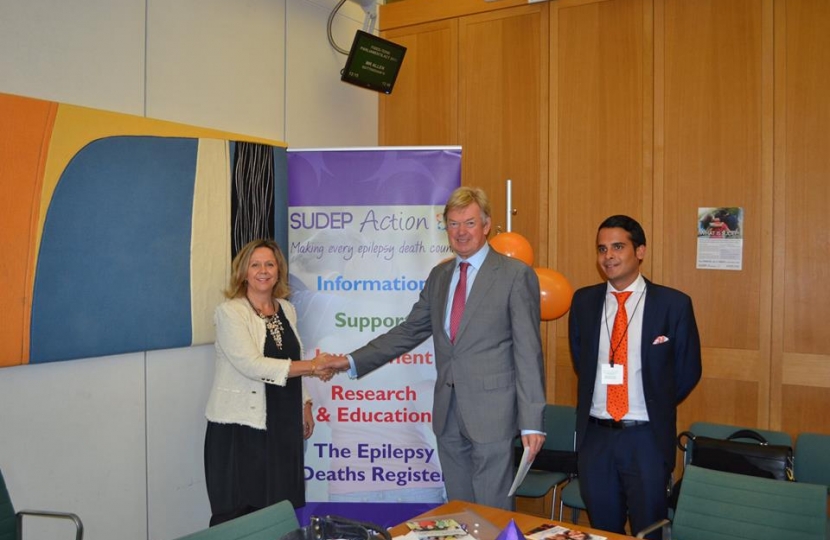 David Tredinnick MP attended a parliamentary reception to support the launch of SUDEP Awareness Day -23 October by epilepsy charity SUDEP Action.  The awareness day, which will be held annually, is dedicated to promoting ways that people with epilepsy can reduce their risk of SUDEP.

David said: “I was pleased that SUDEP Action launched SUDEP Awareness Day. It is important that people with epilepsy are well informed about the risks associated with the condition and what they can do to stay safe.”

Karen Osland, Acting Chief Executive for SUDEP Action commented: “We were delighted that David Tredinnick supported our campaign.  Most people with epilepsy will live long and healthy lives, but we feel it is important that those who are at risk, however small that risk may be, are given the opportunity to make the right lifestyle choices.  They can only do this if they have an open and honest conversation with their health care provider.  There are positive steps that can be taken to reduce risk and it can be empowering for people to be involved in managing what is known to be a difficult condition.”

SUDEP Awareness Day is part of SUDEP Action’s Call for Openness Campaign which calls for a common sense approach to alert people at risk of ways to reduce their risk.  Although SUDEP is rare, the campaign encourages people with epilepsy to be open about their condition, to report their seizures accurately and to take their medications regularly and as prescribed.  It also encourages doctors and nurses to talk about risk, including the risk of SUDEP, on or soon after diagnosis.

On SUDEP Awareness Day, the charity was urging people with epilepsy, through the tag line ‘Be smart, be safe’ on ways in which they can reduce their risk. Apart from raising awareness, the day commemorated those who have died from the condition.

SUDEP Action was founded in 1993 as a self-help group. It was the first organisation in the UK and internationally to champion the SUDEP cause and is the leading organisation worldwide on this issue.