Leader of the House Pays Tribute to David Tredinnick 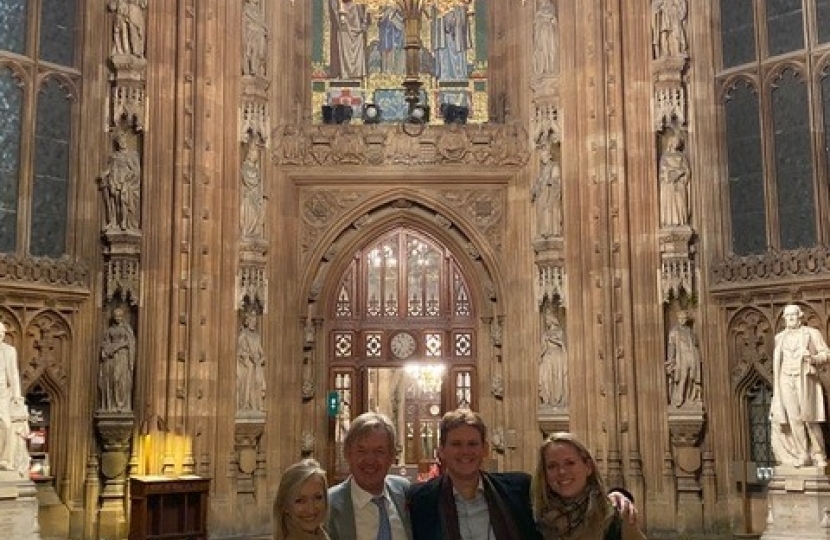 During the Valedictory Debate in Parliament on Tuesday, David Tredinnick, who was making his final speech after more than 32 years as the MP for Bosworth, paid tribute to his constituents, his family, local Party officers and his long-serving staff.

Following David’s speech on the last day before Parliament was dissolved, the Leader of the House of Commons Jacob Rees Mogg told MPs, “My hon. Friend the Member for Bosworth (David Tredinnick) has been such a campaigner for what he chooses to believe in, and the advice he gave us at the end was brilliant. Seneca is normally only quoted by my right hon Friend the Prime Minister, so it was an ambitious quotation. “Choose enemies carefully,” has a touch of steel about it, “Stay out of the bars,” has a touch of realism about it and we know, “Never forget your constituency base,” only too well, particularly as the election looms. We hope that we have not forgotten that in recent years.”

David ended his speech by encouraging the people of the Bosworth constituency to vote for his “brilliant” successor as Conservative Candidate, Dr Luke Evans.

Photograph: David Tredinnick in Parliament’s Central Lobby with partner Carolyn and his children Sophie and Thomas on Tuesday evening, his last day in the Commons.

The full text of David Tredinnick’s valedictory address to the House of Commons can found below or via this link:

Thank you so much for calling me to speak, Madam Deputy Speaker. It is an honour to follow Stephen Pound, who has entertained the House for many years; I enjoyed his speech very much. Today was the new Mr Speaker’s first appearance in the House and this will be my last appearance, but another date that we should recognise today is 5 November, when, in 1605, Guy Fawkes put 26 barrels of gunpowder in a shed up against the old House of Lords.

I have been very lucky to represent the Bosworth constituency for 32 years, covering Hinckley and Bosworth —over 100 square miles. It has changed dramatically. It was originally part of the Leicestershire coalfield—a mining constituency. Desford pit was running when I first went there. We had steelmaking at Desford—Desford Tubes—a great hosiery and knitwear industry, and shoes being made at Barwell.

Yesterday, when I was clearing out my office, I found my maiden speech from back in 1987. I wanted to make some kind of an impact. Colleagues who listened to Kate Hoey will have heard her talk about how different it was then. We had no television in the Chamber; we aspired to get a couple of inches in The Times or perhaps be on Radio 4, but we had to say something of significance. I had a problem in my constituency about which I wanted to make a serious speech: the importation of cheap Chinese clothes, and more specifically, Chinese underwear. I had to attempt to dress this up in a way that would be eye-catching, but not too eye-catching, and the next day, one of the newspapers reported: new MP says, “Knickers to Cheap Chinkies…Lovely lassies are queueing up to support new MP David Tredinnick in his battle to give cheap Chinese panties the push”. This took some explaining in some quarters of my constituency.

Many colleagues have spoken of the importance of staff. I am pretty confident that I have the longest-serving staff in the House, and I want to thank them by name. Matthew Williams, who started work for me in February ’96, has worked for me for 23 years on the complementary and alternative medicine desk and has given great service. My parliamentary agent, Stuart Swann, has worked for me for 21 years and has taken me through all those general elections. Pippa Way has been a brilliant PA and is still working for me after six years. Her predecessor, Thurza Rowson, who was also brilliant, worked for me for 25 years. Jill Burge worked for me in support for 10 years. These are outstanding staff. I caution anybody coming into the House against having inexperienced staff—these are very experienced staff and they have helped me enormously.

I also thank my family. My partner, Carolyn, has been a terrific support, going around the constituency with me. We share most of the meetings and it is great to have triangulation when it comes to what people are saying—sometimes she tells me things that I was not expecting. I thank Rebecca, my former wife, who supported me while child-rearing and did a fantastic job, and my wonderful children, Sophie and Thomas, who still have not forgiven me for pushing them around in a supermarket trolley wearing t-shirts that said, “Vote for Daddy”—they are now 32 and 30.

I have worked with some fantastic officers in my constituency. I want to thank the presidents, some of whom are no longer with us: Jim Davenport, Geoffrey Stokes, David Palmer, Derek Crane, Rosemary Wright and Reg Ward. The chairmen I have worked with include Jack Goulton, Anita Wainwright, David Brooks, Carol Claridge, David Palmer, Derek Crane, Janice Richards, Mary Sherwin, Peter Bedford and Betty Snow. Betty was the treasurer of the Bosworth Conservatives for very nearly 40 years.

I echo the thoughts about the staff of the House. I thank the brilliant Library staff, the catering staff and the Doorkeepers. I also thank Postman John, who retired a day ago, not only for his service—for delivering the post—but for watering my plant, which some have seen; it has grown all the way around my office over the last 20 years.

Above all, I thank my constituents for voting for me and electing me eight times in the last nine general elections that I have stood in. I remember David Lightbown, my Whip, saying to me, “Never forget your constituency is everything”. Even though I voted to remain, when my constituents voted out—60% to 40%—I regarded myself from that moment onwards not as a representative but as a delegate, and I have voted faithfully ever since to get my constituents out of Europe under both the previous Prime Minister and the current Prime Minister.

I rather regret that I am addressing retiring Members and not new Members. If I had any advice, I would quote Seneca: “A man should choose his enemies carefully.” That is very important in politics. I have tried not to have any enemies, and I hope I have not got any in my constituency—I have people in to talk to me if they do not like what I have said. I would also reference Bevan: “Stay out of the bars and specialise”—very important too. I have specialised in a couple of fields, which I will touch on if I have time. Finally, I would quote David Lightbown again: never forget your constituency base.

I did a lot at the end of the cold war. I met President Gorbachev in Moscow and President Yeltsin. President Gorbachev, who was on the news a couple of days ago, said to us young politicians, “Politics will find your every weakness and test you in every way”. I thought at the time, “I don’t think this makes any sense”, but I now know he was absolutely correct.

I have long championed alternative and complementary medicine. I have backed the homeopaths right the way through. I remember saying to my former right hon. Friend, the late Lord Spicer, “Should I keep going with this subject?” He said, “David, all a Back Bencher can hope for is to be remembered for something”. I have championed that cause ever since. So I say this to the House as I finish: we have carbon footprint problems, but a real problem is the carbon footprint of medicines. It is not being addressed, but it is hugely carbon intensive.

Madam Deputy Speaker, it has been a pleasure to serve with you in the Chair. I am sorry you did not make it to the speakership in the election yesterday, but I congratulate Mr Speaker on his success, and I thank again my constituents, my staff, my family and my friends in this House. I shall miss it, but life goes on and I have a brilliant successor on the way in the Conservative candidate, Dr Luke Evans. I encourage my constituents to vote for him.

This week Parliament has been in recess and as such I have been at home in Bosworth, mostly in meetings about the administration of my office for the coming parliamentary year, a meeting with the Secretary of State for Digital, Culture, Media & Sport (DCMS), and of course campaigning.